perhaps you have already heard of the events of my recent presentation at Boston's Museum of Science. If you have not, then I regret to inform you that the Shabowa bird does not exist, and never has existed. I can only offer you my most sincere apologies for this charade.

I suppose I underestimated my audience members, who were quick to point out the inconsistencies in the Shabowa bird's design. I was soon inundated with questions I simply couldn't counter with legitimate answers. How can a bird with a goose bill eat a rodent? How can a mostly featherless bird survive the harsh temperatures of the Gobi Desert? How can a bird with talons run at such heightened speeds?

I am sorry that I lied. I am ashamed and embarrassed to have sullied the sanctity of my profession and my bright future therein. Cryptozoology is surrounded by enough skeptical onlookers, and the last thing I want to do is add numbers to that doubting crowd. Although you may have lost faith in me, please do not lose faith in this groundbreaking field of research. I only proceeded this way in an attempt to garner funding so that I could undertake much more organized and sophisticated research.

I explained this at my presentation and was lucky enough to be forgiven. My audience suggested that I remain committed, improve my research skills, and try again. Although I am positive that I still have much to accomplish and my name will still one day be writ across history books, I feel they are right and it is indeed time to turn a new leaf. I will do so in private. It is in my best interest to relinquish from public view for a time while this incident blows over. 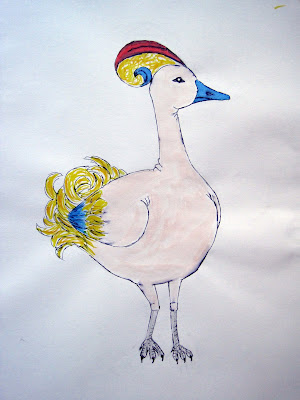 Here is another rendering of the majestic Shabowa Bird.
Posted by D.N.F. at 11:24 AM 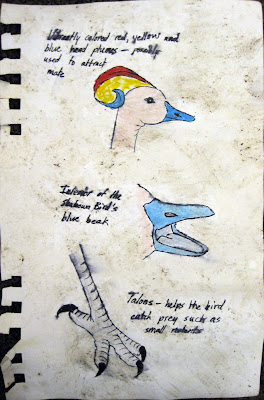 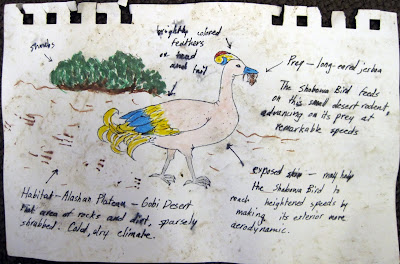 Though the originals were given away to a less than trust-worthy source, I fortunately managed to scan copies of my field notes while in China.
Posted by D.N.F. at 11:18 AM

It feels so good to be home, back in the loving arms of Matilde. This summer has been a great victory for me!

However, I am a little insulted that I have yet to hear back from the Bigfoot Research Institute. I air mailed them a package containing priceless information a couple of weeks ago, and still no seal of approval. Frankly, I don't think they understand the gravity of the situation. Or perhaps they aren't up to the challenge of the noble pursuit that is cryptozoology after all.

Shabowa: The Cry of Discovery

Glorious public: I am en route to America, and I have an announcement that should bring you much pleasure! Wednesday, July 28th at Boston's Museum of Science I will present my findings in a lecture titled "Shabowa: The Cry of Discovery." I commend the Museum of Science for their acumen and foresight in showcasing my prestigious work.

Come to the Cahners Theater in the Blue Wing on Level 2 of the Museum at 3:30 to witness this historical event!
Posted by D.N.F. at 7:20 PM

To the Scientific Community At-large:

After having traveled to the Gobi Desert in search of the Mongolian Death Worm, I made a far greater discovery. I have uncovered a brand new cryptid, and I believe that I may be the only person ever to have set eyes on the animal.

While sifting through the dirt behind a cluster of shrubs, wondering if I should have ventured to the Alashan Plateau at all, and considering heading South, my worries were put to rest. Out of the corner of my eye, I saw something speeding towards the shrub bushes, and then I heard a squeak. I dropped my tools and stared. The creature had paused for a minute to capture its lunch: a long-eared jerboa. The bird ripped the small rodent apart and, in a beautiful burst of red, blue, and yellow plumes and bald areas, sped away, calling out Shabowa! Shabowa!

Alas, I was so mesmerized by the event that I dropped my camera, and the lens shattered! Therefore I am sadly without a camera, but I have been taking field notes ever since.

My second run-in with the animal occurred a few days after this. I was walking along the plateau, when I spotted the creature from about 100 ft behind. Again, the bird had stopped to gobble up its prey, a rodent that I have yet to identify. (However, I kept the bones as evidence.) Before I could advance upon the animal, it ran off, again crying Shabowa! Shabowa!

I have christened it "The Shabowa Bird." Now I must return to the Alashan Plateau for further research. I have only stepped into town to gather supplies and announce this zoological development.
Posted by D.N.F. at 5:59 AM

Would anyone be willing to look after Matilde for a couple of months? My next expedition should prove to be rather long, and I can't take her with me.

Please send responses to DanicaNorthFranklin@gmail.com so we can set up the first interview and initiate a background check.